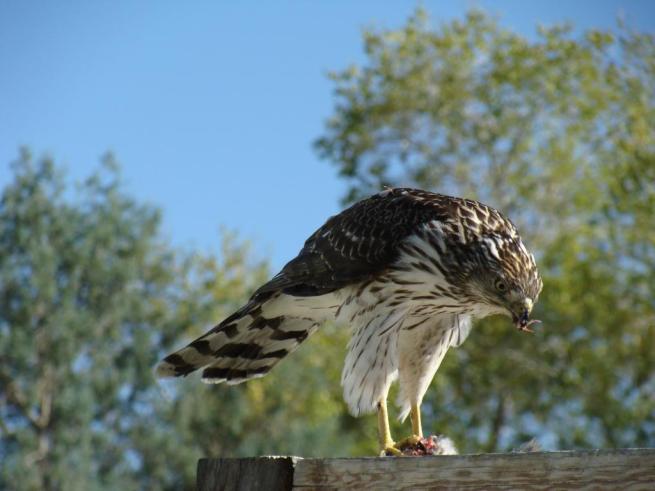 A pigeon fancier from Connecticut was sentenced and fined for capturing and killing Cooper and Red-tailed hawks.  Apparently this pigeon fancier got tired to seeing his birds killed by the birds of prey and decided to take matters into his own hands.

Here’s the link to the story.

This is the latest development of that news back November last year.

Apparently the judge ruled in favor of Mr Weir and ordered the Countryside Alliance to pay up.

Here’s a snippet of that article and link.

Maurice Weir told a court he witnessed a “bloodbath” when hounds from a local hunt club attacked the birds on his land in Loughgall, County Armagh.

He sued the Countryside Alliance over the intrusion by the Kinnego Grange and Canary Hunt Club’s dogs in 2009.

The judge rejected defence arguments that Mr Weir had fabricated the claim.

Giving evidence to the High Court in Belfast, Mr Weir described how he emerged from having lunch on 7 February, 2009 to discover “a bloodbath” on his Kinnego Road property, with dead and injured birds lying on the ground and in dogs’ mouths.

He said up to 15 hounds had broken into his pigeon lofts and aviaries and attacked highly sought after homing pigeons, some who could make their way back to Northern Ireland from France,

He had been planning to use the birds to set up a small stud business and sought damages for the killing of his pigeons, consequential loss, the cost of repairing his aviaries and a further payout for distress and injury to feelings.

Here’s an article from KALW website. A Radio station at San Francisco, CA.  The person interviewed is Bill Milestone and he gave a basic summary on how the pigeon racing works.

Bill also mentioned that if your pigeons are happy, the will come back home.  Happy as in well fed, good shelter and a mate to come home to.

here’s an excerpt from the article;

“There is a system called widowhood. Shall we say, the males and females are paired up in their own nest boxes. They establish their territory. And then they’re separated.”

This stress can act as a strong motivator because typically, pigeons will mate for life. They’re birds of a feather that stick together, even taking shifts to warm their eggs.

While both male and female pigeons are used for racing, widowhood is used only for males. That’s because, in general, while hens would be more interested in flying home to their babies or eggs, the male birds are more interested in flying home to the hens. Thus, in widowhood, trainers will separate the male bird from his mate a few days prior to the race, and then right before the truck arrives, they reunite the lovebirds just before hauling the male to the start line. So, that bird’s got one thing on his mind.

“‘There she is, I got to get back !’” is how Milestone puts it. “So, the bird that is racing, wants to come back to his nest box, and when he arrives there, the hen is waiting for him. And that motivates him to… full performance!”

To read the whole article by clicking on the link below

Recent study about racing pigeon’s homing skills shows that racing pigeons fly home faster in polluted air.  First impression that I had was that even humans will run or walk faster if they were ever in an area where there’s polluted air!

Well, some scientist made a study in North China Plain where there are a lot of polluted air that are higher than anywhere else in that country and compare results on pigeon’ racing times and pollution level.

Here’s the full link for the article in Live Science.

Just in case that link is not available here’s an excerpt from the article.

China currently has an air pollution problem so severe that smog is occasionally dense enough to be visible from space. But the frequently choking haze is providing an unexpected benefit to racing pigeons in one of China’s most polluted regions, helping the birds to navigate home faster, researchers have found.

Using publicly available data gathered from environmental and pigeon racing agencies, scientists analyzed pigeon performance in 415 races that took place on the North China Plain, where concentrations of air pollution are higher than anywhere else in the country, the scientists reported. By comparing the pigeons’ racing times to records of pollution levels on race days, the researchers hoped to learn whether air pollution might affect how well the pigeons performed during the races, the scientists said.

Racing pigeons, also known as “homing pigeons” for their ability to find their way back to a home base, are specialized birds that are bred and trained to compete in tests of navigation and speed, averaging about 37 mph (60 km/h), the researchers said.

Two Harvard researches recently made some studies on how pigeons fly is almost absolute precision.  They have setup video cameras and some obstacle course so the pigeons have to fly over in order to get their food.

Here’s a snippet of the article from Headline & Global News

Researchers Andrew Biewener and David Williams of Harvard University have uncovered the reason for the seemingly impeccable flight abilities of pigeons – they can make choices on what flying technique to follow when faced with an obstacle.

Scientists and engineers have studied the flight patterns of pigeons, which, despite a great presence in the city where major unnatural path blocks are present like buildings and cars, rarely crash compared to other birds like robins.

The duo set up an area with video cameras and pre-planted obstacles made of plastic pipes, which the pigeons have to fly over in order to get their meal. Upon review of the videos, the two researchers observed that the pigeons perform two techniques when passing through an obstacle. The more amazing part is how the pigeons are able to decide on which technique is the better choice, based on the distance of the obstacle they had to pass through, according to Phys.Org.

The pigeons had to scrunch their bodies in order to pass through the obstacles. However, for obstacles with a distance of at least half a wing apart, the pigeons opted to lift their wings as if to flap, but when they approached the obstacle, their wings “paused” so that they didn’t hit the plastic pipes. When the pipes were much closer, the pigeons opted to pull their wings into their body – a technique that presents a higher chance of losing altitude, but greatly protects the birds from wing damage.

Somewhere in Northern Ireland UK, a pigeon fancier is suing a Hunt Club for killing his prized birds and destroying the loft.  Here are more details below.

Maurice Weir claims the dogs destroyed some of his prized stock after trespassing on his land near Loughgall.But the Countryside Alliance is defending the action, accusing him of bringing a fabricated and fraudulent case.

Proceedings have been issued over an alleged intrusion into his property by the Kinnego Grange and Canary Hunt Club’s animals in February 2009.

Madam Justice Denise McBride was told 59 pigeons were killed in the disputed incident.

Barrister Michael Stitt QC, for Mr Weir, claimed the huntsmen were negligent in failing to control their dogs.

Setting out the level of damages being sought, he said the allegedly killed pigeons had a market value of just over £21,000.

Another £37,500 in potential earnings from breeding the birds over the next five years was also lost, the plaintiff contends.

Mr Stitt added that damages for distress and upset may also feature.

But David Ringland QC, for the Alliance, argued that the hunt’s dogs were never on Mr Weir’s Kinnego Road premises on the day in question.

“We are saying this case is a fraud,” he told the judge.

“They had no inter-relationship with the plaintiff’s birds. It doesn’t get much more fundamental than that, My Lady.”

Any evidence to the contrary would amount to a “complete fabrication”, the barrister contended.

“The defendant will say that the plaintiff’s pigeons were not killed or injured by hounds belonging to this club.”

The court heard conflicting figures were supplied on the value and number of birds involved.

Beginning his evidence at the start of a five-day case, Mr Weir described them as Channel Pigeons highly sought for their ability to fly to France.

I came across this article on the NY Times about the Pigeon King Arlan Galbraith from Canada.  He built his pigeon king empire back in 2001 to 2008 and amassed billions of dollars in getting investors which are mostly farmers to buy pigeons from him to farm and raise.

The article also mentioned a couple who borrowed $125,000 against their farm property and they bought 360 pairs of pigeons from the Pigeon King at $165 a pair. The article is quite lengthy but interesting.  If you have the time go ahead and click on that link above.

On some other news article it mentioned that he was convicted of fraud for luring numerous Canadian and US farmers to raise pigeons farms and guaranteed a profitable back-back prices.
7-year prison term for Pigeon King